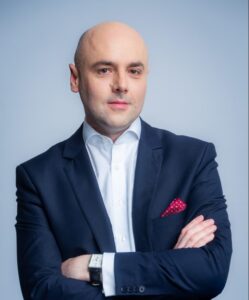 Managing Director of ACCA Poland and Baltic Countries, responsible for development of ACCA and ACCA qualification recognition. Former Deputy Director General of the Lewiatan Confederation (2012 – 2017), supervising expertise and international cooperation. Member of the Board of Directors and Executive Office of BUSINESSEUROPE in 2012 – 2017; from 2006 to 2012 – Director of Programming Activities at the Foundation for Science and Technology. Member of the Prime Minister’s Team of Strategic Advisors (2008-2011), board member of the Donors Forum in Poland (2006-2009) and member of the European Forum on Philanthropy & Research Funding Steering Group (2007-2008). A sociologist and political scientist, graduate of the University of Warsaw (2001) and the Central European University in Budapest (2002); lecturer at the University of Warsaw (2002-2007), negotiator and facilitator, author and co-author of books, reports and publications (including “Poland 2030 – Development Challenges [Polska 2030 – Wyzwania rozwojowe]”) dedicated to communication and conflict management, education, social movements and social capital; he has been addressing the issues of public and industrial policy, education, and science funding.